In The Window - 70 - Buffo Replaced
SpiritPlantsRadio.com

Not the Here & Now I wanted which was
http://www.youtube.com/watch?v=z3MUarfG2Ns

In 1957, the British military began conducting nuclear tests in the Pacific Ocean and based themselves on Christmas Island. The tests ended six years later and parts of the island were sealed off for decades. What signs are left of its dramatic history?  The searing east wind blows and the ocean swell booms ceaselessly on the reef, like a distant train in a tunnel. There is a ruined church of coral rock close by. An inscription, etched in cement, invites Church Notices. Who pinned up the last one and what did it say?  Christmas Island has gone through a lot of change. It is now part of the Oceanic state of Kiribati (pronounced Kiribas) with a capital in distant Tarawa, a day's flight away via Fiji. And it has a new name, Kiritimati.  The people of Kiribati, formerly the Gilbert Islands, have difficulty pronouncing the letter S. So Christmas becomes Kritmat, and then Kiritimati - a new name is born.

Most significant is the increase in the human population, now approaching 10,000. There are more vehicles today than there were people in 1958.  Concerns have been raised about the island's carrying capacity due to its unreliable water supply, but the Kiribati government has continued to encourage resettlement from overcrowded Tarawa. Some fear this poses a 21st Century threat to Christmas Island's environment.  There are new schools, a bank and even a small hospital. I spoke to a tired looking doctor, the island's obstetrician. How many babies in a week? "Oh not many, about 10," she says. That is 500 in a year.

But for others connected with this island, time has stood still. Trevor Butler, now 75, went out aged 20 as a sapper with the Royal Engineers.  After his return he developed a cataract in his right eye and for much of his life he has been trying, and failing, to get compensation from the Ministry of Defence for what he alleges was harmful exposure to radiation during his military service. He is a vigorous, determined man and still fascinated by the island. Before my departure he asked me if I would see if there was anything left of the structures he had helped build during his time there.

A few weeks later I am on Kiritimati in a lorry heading south. To my left is the deep blue of the ocean and to my right mile after mile of salt-bush scrub, a rich green after recent rain. The road is remarkably good, considering it is 50 years old. Then I remember Trevor telling me they added cement to the tarmacadam to help it set.  I am with William from the Wildlife Department and we are driving to the remote south-east tip of the island, once ominously called the Forward Zone. It was high in the atmosphere over this area or just offshore that the bombs were detonated, and for decades it was sealed off.  William traps feral cats out here because they are a threat to the sea bird colonies and he says he has seen something I might find interesting.

We have driven fast for two hours - this is the biggest coral atoll on earth - but now slow to a walking pace.  It is the birds. Sooty terns. Tens of thousands of them, in the air and on the ground. A glorious, teeming, deafening cacophony. Did they really explode an atom bomb over this? Well they did, and there must have been a moment after the flash when there was silence.  William stops the lorry and we begin walking into the scrub. It is taller than we are so it is like entering a maze.  What we are looking for has something to do with the giant tethers that were constructed for a couple of the atom bombs which were suspended from balloons and detonated, rather than dropped as air bursts from planes.

The sun is setting and I am beginning to get worried we are lost, when William calls out: "Here!"  It is a massive slab of concrete about 50 metres square with huge rusted steel rings set into it. In the middle there are six bigger rings close together.  I suddenly think of Trevor with his shovel, stripped to the waist in his army shorts like in the photos he showed me.  There was a major clean-up of remaining military debris in 2006 but this looks unmovable. The thing is so extraordinary and in some respects so bizarre in that wild, bleak place that you cannot help but be impressed.   You wonder what a visitor from space might make of it or an archaeologist in 500 years with no knowledge of our civilisation. You would have to explain so much: that there was something called a Cold War going on and a once great imperial power was struggling to keep up. 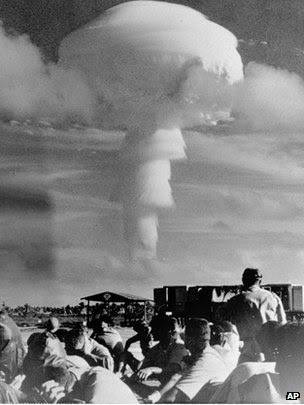