A hole in the brain

I am a recent (about 3 weeks) convert to 'intelligent design' but without the x-ian god baggage but relying on Gia. There is a bird in Australia that has a hole through its brain, from one ear drum to the other so it can get directional information from the frequency of it's spices call which is at a bad wavelength for this function, I can see (pun intended) how the eye can evolve from a light sensitive cell to the complex eye – but a hole through the brain? Half a hole is useless as is 9 tenths you need a complete tunnel.

I don't have much time for “organized religions” I feel the moment you declare a set of texts as “holy” and “the truth” then God goes out the window, she will not be constrained by a book. The “truth” can be seen in anything as long as you have the vision to see it as Crowley said “It is a fatal mistake to discriminate between the spiritual importance of meditation and playing golf”. Once you have your beliefs set in stone you can no longer evolve and even a casual glance at the universe reveals it to be based on change and evolutionary development. Not just the Darwinian species thing but the basic physical manifestation of matter it's self, look into the night sky (or even the day – and the Sun) and countless stars where Hydrogen evolves into Helium – Helium evolves into Lithium - Lithium into Beryllium - Beryllium into .... and on to Uranium - thus creating the very stuff we are made of. We are just the universe becoming aware of it's self, our belief in our individuality is just the result of our brains piss poor design, with it's new hardware upgrades bolted onto the preceding hardware. We are a monkey riding on a dog that's riding on a lizard – no wonder it's so hard to get anywhere (;>{

Talking of time I heard a scientist on the radio the other day say faciley “furlongs per cubic second” - cubic second! Makes my poor monkey brain boggle - 2 dimensional time I can just about handle, forward & back ok, left & right well ok in a multyverse with alternate dimensions BUT up and down - HELP! 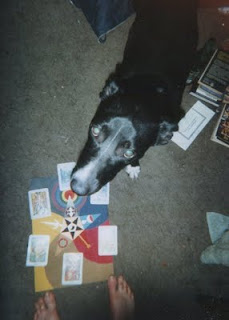