part 1 of my Hagiography

As it's an 'encore' weekend at Spiritplantsradio.com I thought I'd share with you the thrilling early chapters of my life.

It explains a lot

I was born 15th February 1956 in Rushgreen hospital Romford Essex, my identical twin did not survive long after birth due to his skull being badly crushed. My first memory is in my pram in Wooly's (I think at that age all department stores were known to me as Wooly's), Teddy fell out and although I screamed and screamed I couldn't get "them" to stop and rescue him. My next memory is again in Wooly's, I was a little older as now I was walking, as I moved through the shoppers I suddenly felt Teddy brush past my face, I spun round and grabbed hold of him with a desperate vice like grip and buried my face in his fur, when to my horror my mummy grabbed me by the collar and pulled me away from my beloved Teddy (yes my own mother!), as I lost my grip I looked up at him and found a women in a fur coat! To this day I suspect this fiend was probably Cruella deVille who had kidnapped Teddy and killed him and skinned my lovely Ted to wear his pelt.
In 1960 we moved to a Shop in Clacton. It was two shops knocked into one and so I had a playroom as well as a bed room this was accessed by a set of outside steps. The shop was on the high street and only a short distance from the beach down a tree lined road that was great for conkers. 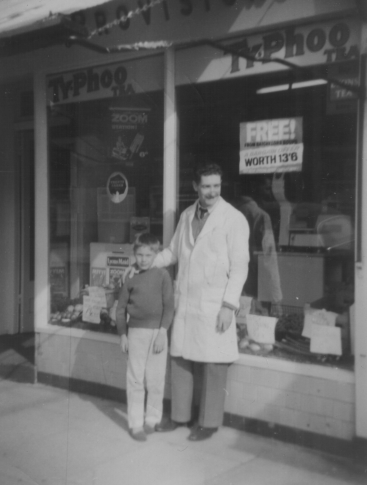 While playing pirates with my friend Ginge (below) we had a sword fight using our penknives, Ginge took a swipe and sliced my arm open across the inside of my left elbow opening the main vain and the blood started pumping out. I remember coming down the outside steps saying over my shoulder “I might not ever play with you again” and made my way into the shop obviously freaking out mum & dad. I was rushed to hospital where I claimed I had fallen on a drawing pin as I didn't want to get Ginge into trouble. The surgeon who stitched my vain back together pointed out the obvious holes in this account, but I stuck to my guns.
The year after 'Pirates' I went to stay with my mothers foster parents Granddad Moon & Nana Fluff in Romford. Their surname was Moon but for some reason I named Nana after the next door cat! Whilst out on my trike I fell off and hurt my arm, I cried and complained about the pain all night but was told “it's only a graze don't make such a fuss.” At the doctors the next day he took one look and said It's broken and I had my first trip in an ambulance, the ambulance men thought it funny I insisted on giving my Clacton address. The rest of my stay was wonderful as GM & NF were so guilt ridden I was able to twist them round my little finger.

Whilst at Clacton I made my mother proud of me for the first and I suspect only time. I came second in the school sports day wheelbarrow race, I was the barrow and Ginge the pusher. I know she still had the newspaper clipping when I was in my 30s. 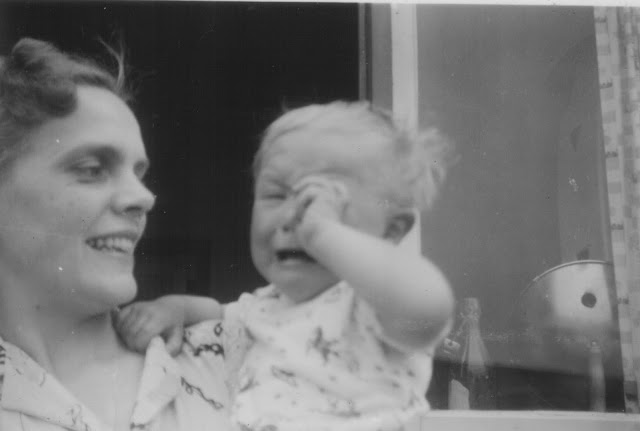 The year we took the shop the first supermarket opened, disaster. Dad held on for another year before we lost the shop and had to leave. This meant I missed the last episode in a Flash Gordon series and to this day I don't know how he escaped the deadly crushing arms of the robot enemy.

At Clacton was the best pub I have ever known it was the Golden Lion and had it's own cinema that showed non-stop animation. The kids were parked there while the adults went to the bar. It was fantastic, not just the usual cartoons but films of Javanese shadow puppets and other wonders slipped in between the Popeye and Woody Woodpecker, I loved it, a big bag of flying saucers and non stop animation. It also had a sign in the car park reading 'please park prettily' which I found hilariously funny imagining cars parked in circles with fairy lights.
We went to stay with my fathers parents at their pub in the docklands (at that time actual docks) 'The Brunswick Arms' for a while (2 or 3 months I think) and then moved in with my god parents Chaz (above) and Doreen in Basildon and I had to restart school. All I can really remember of the house is the home made wine bubbling away at night in my bed room. I remember we had constipations to see who could get the most kids on their bike at the same time and make it all the way down the hill. The school had a film club and I remember on night for some reason I had the wrong colour ticket and burst into tears, the teacher was mystified why I had started crying – I thought I was going to miss the film I don't see what she didn't understand. To this day I have no trouble crying – in fact the day before I wrote this Dave came round to find me crying at the final episode of The Woman In Black. The girls used to like to bring friends round and then put ST TNG episode “Skin Of Evil” because the eulogy for Tasha Yar always starts me off. I think it was at this school I was made to write with my left hand for a week because my hand writing was so bad they thought I might be left handed – I'm not, but I did/do use a smeary stile to cover up my complete inability to speal evan the simplist of words (I never tire of that joke).
I have no real idea how long it was before we moved to the bungalow at Thundersley. I remember the first morning as I went off to the woods alone so I could listen to the Archers omnibus, I was an 'Archers Addict' even at the age of 6. One radio program I did avoid was 'The Clitheroe Kid' as I didn't like cowboy stories (above), then I happened to catch it by mistake and realized my mistake.


And if you don't behave there will be more of this in the future.

13. Mystical Weapons - Gilbert Releases His Pet Salamander Into The Wild (1:13)

The solo project of folk artist Kao Kazlauckas is an invitation to reflection and well-being. Subtly, his music and velvet voice little by little takes care of your mind, leaving a peculiar sensation of comfort and lightness. Grandson of Eastern European immigrants, born in Santos and raised in Rio de Janeiro, had lived in Europe for some time, Kao brings this diversity to his compositions, which sets to the project out of the ordinary, and generate a curiosity about the creative process behind the melodies and chords carefully crafted.

Making the recordings at home, Kao has been releasing one song per week to meet the numerous requests received on his Soundcloud page, coming from people who, like me, were intrigued and eager to hear more of his work that although presented (still) in demo version is very authentic and inspiring.

Braulio Almeida is helping Kao to record his first album, and  Kao is looking for a label to release that album next year. 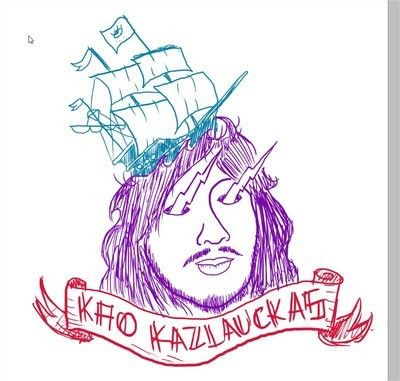 The end of the week has caught me by surprise again so no pic's or info - sorry.  But a different version of Dana's "Get My Rocks Off" coming soon, the one in this weeks show is a cassette copy I have left after loosing the original record.